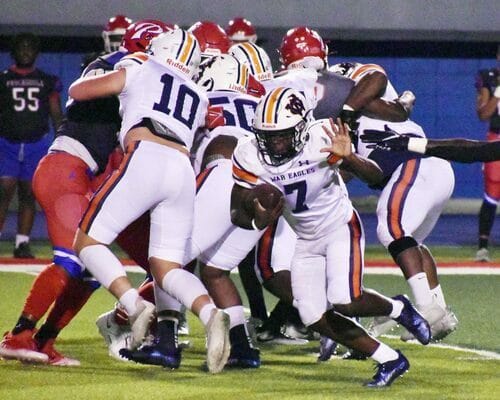 Click on the screen above to watch our weekly highlights show.

PASCAGOULA — Missed opportunities proved to be the difference Friday night as the Panthers of Pascagoula held off Wayne County High School’s War Eagles, 21-14, in the final non-district game of the season.

The loss dropped WCHS to 2-2 on the year heading into the District 3-5A opener on the road against South Jones.

WCHS saw a touchdown nullified by a penalty and watched some big plays by the Panthers — including a defensive stop inside the red zone with less than 1:30 to play — spell the difference in a contest that featured physical play and a little back-and-forth jawing between both squads.

On the opening drive of the night, WCHS marched downfield quickly, with Carter Hankins hitting Isaiah Boyd with what appeared to be a 43-yard touchdown pass. Instead a penalty nullified the score and the drive stalled from there, resulting in a punt.

The Panthers drew first blood with 6:40 left tin the second quarter, using an 8-yard run to make it 7-0.

The War Eagles answered with a solid drive that was capped off when Aikerien Hopkins bulled his way in from 3 yards out. The War Eagles lined up to kick the extra point, but instead Hankins stood up from his holder’s position and threw a pass to Brayden Mills for the two-point conversion. That made it 8-7 War Eagles after the 74-yard, eight-play drive.

The Panthers took the second half kickoff and matched downfield, capping things off with a 36-yard run that opened up a 14-8 lead with 8:40 left in the third quarter.

WCHS again responded, making short work of a drive, capping it off when Hankins hit Jalen Jones with a 5-yard pass. The extra point was blocked, leaving things knotted up at 14-all.

Again the Panthers answered, capping off a solid drive with a 41-yard pass play that opened up a 21-14 lead with 1:53 left in the third.

After a defensive stand gave the War Eagles the ball at their own 19, the offense marched downfield quickly, needing four plays and a defensive holding penalty to reach the Pascagoula 18-yard line. An interception on fourth down ended the threat, though.

For a complete, detailed story — along with a full statistics package — from the game, be sure and pick up a copy of the Thursday, Sept. 22 edition of The Wayne County News.